The Giant Sequoia and Coastal Sequioa, also known as Redwood, are magisterial trees and they feel at home in various climate types. The trees belong to the group of highest, oldest and thickest trees on earth. They are also fast growers and they are not susceptible to disease. These trees can withstand frosts of up to -15 degrees Celsius. They remain green all year round (evergreen). The Metasequoia can reach a height of 40-45 meters and loses its needles in winter.

Although these trees had been found in Europe for more than 140 million years, they had disappeared from Europe after the last ice age. In the course of the last century, Sequoias were again planted in various places in Europe. Their number is growing steadily. They still feel great at home on the European continent. If you want to get an impression of the size and location of some impressive specimens in Europe, check the "Monumental Trees" website.

The Coastal Redwood (Giant sequoia tree), Giant Sequoia (Giant Redwood tree) and Metasequoia are the last three species of the subfamily "Sequoioideae". The Coastal Redwoods and Giant Sequoias could only be found in the wild in North America, but there more than 95% of these trees have disappeared in recent decades. The Metasequoia was discovered in China as recent as in the 1940s. It is not without reason that these trees are on the IUCN list of endangered tree species. 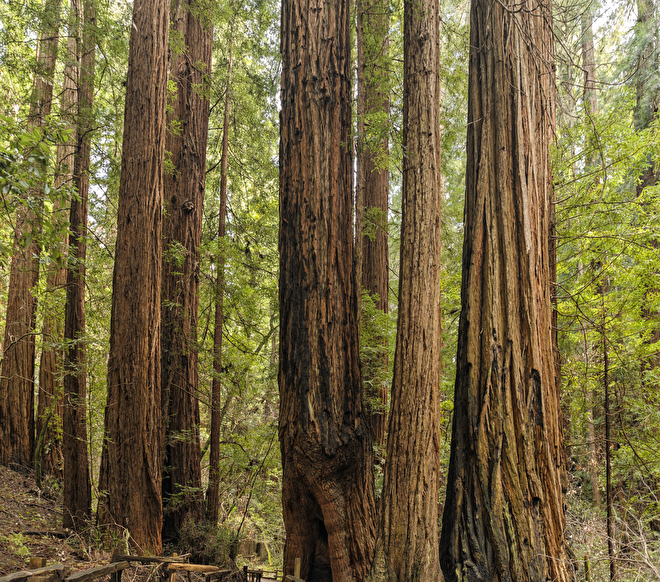 Sequoia trees absorb a lot of CO2. Giant Sequoia - Giant Redwood trees (Mammoth trees) and Coastal Sequoia - Coastal Reddwood trees (Coastal mammoth trees), like other trees, break down CO2, thereby releasing oxygen (O2) and storing carbon (C) in the wood. Because of their growth rate, they do that like no other. Sequoias can generate up to 25 m3 / ha of volume. This amounts to almost 15 tons of CO2 absobtion per year. This makes them one of the top growers in height, volume growth and CO2 storage. There are tree species that process more CO2 per m3 of wood, but these often have a much lower growth rate.

Wood from the Giant Sequoia and the Coastal Sequoia has a beautiful red-brown color with beautiful grain. The wood contains tanine that provides natural protection against many insects and rot. The heartwood contains the most taninne and therefore also lasts a long time when used outside. Mammoth trees also have a very beautiful reddish-brown colored bark.

The Sequoia trees, Giant and Coastal, are very beautiful and fascinating trees. In addition, every extra tree that we plant is good for the earth.